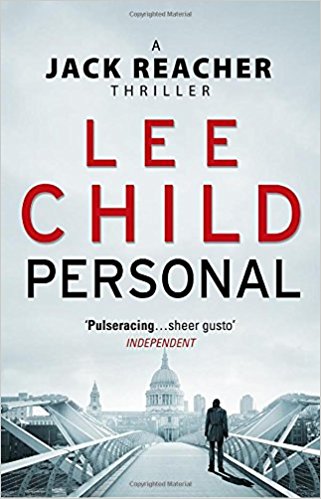 It’s not that I’m an ‘author snob’ – although I can understand why that might be true – it’s just that procedural crime, thrillers, page-turners and the like, whether books, films or TV series, usually boor me. I just don’t care enough: who did it, how they did it, why, where, and, well … who cares?  But I decided to give Lee Child a go. Everyone else is. This one, Personal (2014) is #19 of 23 and counting. He produces one bestseller every year.

I haven’t tried Stephen King, either. Yes, I know, I know. I should!

I was nearly put off by the quote, from the Independent, on the cover of this one: “Pulseracing”. See it? It’s not even a word, it’s two words: Pulse racing. It means that it makes your pulse race; not the book’s pulse, whereas … Oh, forget it! See what I mean?

I place a lot of faith in page one. Here is the first paragraph of this page one:

Eight days ago my life was an up and down affair. Some of it good. Some of it not so good. Most of it uneventful. Long slow periods of nothing much, with occasional bursts of something. Like the army itself. Which is how they found me. You can leave the army, but the army doesn’t leave you. Not always. Not completely.

Chatty. Casual. Matey. Short sentences, even if some of those short sentences aren’t actual sentences (no verb) but are there, nonetheless, courtesy of authorial licence. But it was the line, “Which is how they found me.” that sparked my interest.

The chapters are short – 58 in this one – and each one is like a little scene from the movie (there’s bound to be one) with a chapter-ending waterfall, some no more than an amusement – “So I headed for the sound of her voice, and stepped into a room, and came face to face with myself.” – some a major plot point  – ” …first a tiny pinprick of sudden light in the far distance, and then the snap of flags everywhere as a gust of wind blew by, and then Khenkin’s head blew apart, right next to my shoulder.” Although this is action, the first real action (p116), a death, it’s passive action: Reacher doesn’t do anything, it happens to him. Well, it was supposed to happen to him: that little gust of wind, not an act of god but one by the author, blew the initially accurate bullet off course.

I was getting a little restless.

The next chapter continues with the aftermath: “His shattered head hit me on the way down and left a red and grey slick on the shoulder of my jacket. I remember thinking Damn, that was brand new, …” Such black-humoured, character-layering, Tarantino-esque moments are common in popular culture today. It’s been 23 years since Pulp Fiction – a cliche yet?

I re-arranged myself in my seat.

It took another 78 pages to get to the first piece of thrilling action: Reacher violently and swiftly overpowers 2 thugs masquerading as policemen; kills one, maims the other, but in the description of this, this:

… and launched the same elbow at the first guy, who was a big strong man, but clearly not much of a fighter. Maybe he had gotten too comfortable with getting by on appearance and reputation alone. Maybe it was years since he had been involved in an actual scuffle. The only way to deal with a sudden incoming elbow was to twist and drive forward and take it on the meat of the upper arm, which is also painful and sometimes numbing, but generally you stay in your feet. But the guy went the other way. He chose the wrong option. He reared up and back…

Three lengthly sentences of explanation, instruction, and justification in the middle of a description of a frenzied fight. This surprised me. But what surprised me more was that it didn’t matter. I was with him all the way. This book is in the first person, which can be limiting: the hero in a first person narrative only knows what they know, but the first person is IN the action, not outside it, and such thoughts and musings don’t subvert the action; the reader is with the narrator, safely in his (the author’s) hands.

This piece of action went on for three chapters and included this description of a man, a villain obviously, getting out of, and back into, a car:

And then a giant climbed out. He led with a bent head and a bent back, folded at the waist, folded at the knees, and then he straightened up in stages, like a complex mechanism, like a child’s toy that starts out as a squat dump truck and then clicks open, one component after another, to reveal an action figure. He was huge. … The action figure became a dump truck again. He bent his knees, and bent at his waist, and tucked in his elbows, and hunched his shoulders, and ducked his head, and backed butt-first into his seat.

And this piece of light-hearted description of a “hideous old farm vehicle” gearing up for motion:

The transmission was slower than the postal service. She rattled the selector into reverse, and all the mechanical parts inside called the roll and counted a quorum and set about deciding what to do. Which required a lengthy debate, apparently, because it was whole seconds before the truck lurched backward. She turned the wheel, which looked like hard work, and then she jammed the selector into a forward gear, and first of all the reversing committee wound up its business and approved its minutes and exited the room, and then the forward crew signed on and got comfortable, and a motion was tabled, seconded and discussed. More whole seconds passed, and then the truck slouched forward …

And it reads so well. I read it many times, and each time it made me smile. Great creative passages like these are worth the time and put this thriller writer a little above the rest, in this, my learning opinion.

But, back to the action, the second piece of action. Serious action only 23 pages on. Similar to the first but on a bigger scale. The first was 2 men, dressed like, but not, policemen asking Reacher and partner, Casey Nice, (her name. Nice.) to nicely get into the back of a van. Reacher didn’t oblige. The second was not a van but a one-door-one-window room behind an auto-shop which they, foolishly it turned out, walked into, with not 2 men present but 4 outside. “He closed the door behind him. And locked it.” End of chapter. The next chapter opens with just over 2 pages describing the 6 seconds of deductive thought going through Reacher’s mind after the click of the lock. This for two reasons: 1) it shows you what a smart-arse our hero is, and 2) it sets the time scale, 100-ish words per second. Reacher and Nice have a little chat which ends with them totting up what they have. A chair, a desk, a dirty jumper in a drawer, an arm chair, a window, a locked door. She says, “We’ve got nothing.” He says, “We’ve got what we’ve got.” “What are we going to do?” And the chapter ends with

So I told her what, and we rehearsed it carefully, over and over again, and then we started doing it.

Well, you’ve just got to turn the page!

So, man number 1 bursts into the room lured by the noise of the armchair going though the window, and while Nice deals with him with her hand wrapped in the dirty jumper and holding a large slither of glass (“Aim for his eye.” She does), Reacher quickly renders unsuspecting but hurrying man number 2 unconscious with the chair and then confronts men numbers 3 and 4, not in the boxed room but in the auto-workshop, bigger space, more to play with, where he can see both of them at once. He deals with them, expertly of course, telling us how and when and why they made the wrong choices and why he didn’t – he’s a smart-arse remember, taking about 1500 words, which adds up to 15 seconds of screen time, just over 5 pages of book time. So that’s how you write action! The chapter ends with

Then I hustled back to the boxed-off room, to see how Casey Nice was doing.

Would you stop there and start preparing dinner?

However, after this bit of page-turning there was over 100 pages of chat, explanation, assumptions, predictions and justification; a long wait for more thrills. This being a ‘thriller’. In fact in terms of pages, ‘thrills’ take up a very small number indeed. Or have I been seduced by the jacket quotes “Another cracker …” “The best one yet.” “Generates relentless momentum … Child’s dedication to suspense … approaches the Hitchcockian” and Child’s soaring reputation? Yes, the thrills happen expertly but not very often. Relentless momentum? I don’t think so.

Oh, the plot? Some sniper has taken a potshot at the French president. The Russians, French, and the British all have their theories, but the Americans know who it was, and the only man to find him is Reacher. But then we learn that the French president was only a decoy/rehearsal; there’s a G8 summit coming up in London. So who’s the target?However on the way there’s two London gangs who get involved – one led by that giant! And, yes, the climax is in the giant’s house where everything is 50% bigger than a normal house (great design opportunity for the movie-version) but Child throws a naked woman in the final scene. Tacky, but you’ve got to be true to the genre, I suppose.

The first Jack Reacher movie, One Shot, of book No. 9, came out in 2012. Child wasn’t impressed, I hear: Reacher is more the build and temperament of a beefy Arni Schwarzenegger, not a weedy Tom Cruise. So we’ll see if there’s more.

Child’s Reacher #20 is in the 3rd person, which might be an interesting comparison to this one in the 1st. But, maybe I am a snob when it comes to airport genres, after all. No. 20, Make Me (2015) is there on the shelf. I’ll think about it.

You can find Lee Child novels, well,  … everywhere. Read one and tell me what you think.

5 thoughts on “Personal by Lee Child”