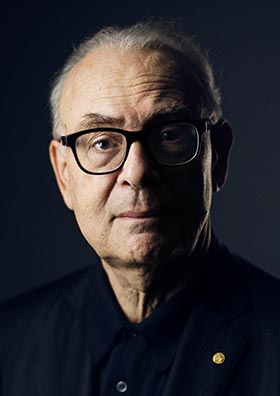 When you watch a movie it is important to understand, not only that decisions have been made about every thing in every frame: the glare from the wet tarmac, the broken zinnia in the vase of otherwise perfect flowers, or the dreadful yellow hat on the third boy from the right, but that even if something is missed, like the broken flower; if someone has not done his or her job well, or even if simply there was not time or money to re-shoot the scene or re-dress the set – so we will just have to live with the little boy putting his fingers in his ears moments before Eva Marie Saint ‘shoots’ Cary Grant in that now famous blooper from Hitchcock’s North by Northwest – we have to acknowledge that what we see is what is meant, and the person ultimately responsible for this is the director, because he or she has allowed his or her name to be put on it.  Just like a name on the bottom of a painting: the person is taking responsibility for what you see. It says, I did this; what you see is what I want you to see.

Similarly with a book of fiction: what we read is what the writer wants us to read and the writer employs various techniques – tricks – to make us think – believe – in a particular way. Most writing is about wanting the reader to believe that what is written is true; and just like ‘the suspension of disbelief’ that audiences in the theatre and cinema have to do to become emotionally involved is what they are watching, so too does a reader: a young girl is fleeing her convent school and suffering the dangers of occupied France. This is what the writer wants us to believe is true, but it is only the appearance of truth, and there’s a glorious word for that: verisimilitude; but what is really true is that I’m sitting in a nice chair with good light and a cup of ginger tea.

This particular ability to mentally put ourselves in a description of something (using words, paint, dance, light, stone, sound) made by someone else is a wonderfully human characteristic and is the sole reason we have something called art.

One of the tricks writers use to make us believe that what is written is true is detail, and ironically, unknown detail (“I don’t know what the figures 20998 and 15/24 stand for”) makes that belief stronger: writers, creators, don’t usually use words or numbers that have no known meaning. Why does he tell us this? Because it is true; so goes the logic.

The Search Warrant, or as it was originally published in France, Dora Bruder, is the 1997 novel from this year’s recipient of The Nobel Prize for Literature, Patrick Modiano. The story is sparked, so he tells us, from a missing-person ad in the magazine, Paris Soir, dated 31 December 1941, which reads,

As a reader, one accepts this. I can comfortably say that no reader is going to spend the time and effort researching copies of Paris Soir, and in particular the issue from New Years Eve 1941, to verify if this ad is true. It does not matter if it is true or not; in the world that Modiano creates between the covers of this fiction, it is true; we believe this, and to assist us in this belief Modiano includes a footnote (footnotes are also very useful in creating verisimilitude), giving the title of the column in which the ad appeared (“D’hier a aujourd’hui” – “From Day to Day”).

Modiano is obsessed with the past, and in particular, the German occupation of France and the French resistance during World War II even though (or because of it) he was born the year the war ended, 1945. “The plot too is the recognisable one [all Modiano’s plots are markably the same] as a search into the past of a first-person narrator.”*. It is a work (some, like Kawakani, say not a novel) that infuses memoir, (auto) biography, detection, and memory. The reader finds out much more about the narrator (the writer?) than he does about Dora Bruder. The narrator knows the address of the parents, 41 Boulevard Ornano; it is next door to a cinema he visited as a child. He, like Dora, and his father, like Dora’s father, Emile, are French jews and subject to the whims and prejudices of the German occupying forces that involve lists, registers, travel documents, curfews, identification badges, suspicion, and intimidation. There are many questions in this book, almost every chapter begins with one; questions about Dora Bruder that Modiano cannot answer, so he answers with details of others; police reports, timetables, journal entries, and memories of writers of the period; and if one of these writers once slept in the same room as he, or Dora, all the more reason for including it. These glimpses of many lives still add up to the shattering truth of Dora’s; at least one which Modiano wants us to believe.

The autobiographic detail is fascinating – what a surreal time and place to be in where what authorities think you are can cause alienation, deportation, imprisonment, death – and the mystery of Dora pulls you along, but memory as we all know can be treacherous.

(I have a friend, let me call her Gillian. Every time I poach tamarillos I have a vivid memory of Gillian showing me how, in the kitchen of someone else, let me call him Harry. Gillian, however, has no recollection of this, not of ever eating poached tamarillos, before I fed her some on a recent visit, or of ever being in Harry’s kitchen. Did this event happen? I believe it did. She believes it did not. What is true?)

As I’ve said before, somewhere**, fiction is all about truth, but to make it clear, one has to lie about it a little.

On his Italian father’s side he is descended from Sephardic Jews from northern Greece; his mother, was a Flemish actress, “a pretty girl with an arid heart“; Flemish is Modiano’s first language as he was raised by his maternal grandparents: his father, a black-marketeer,  was interned, his mother on tour. His younger brother Rudi died at the age of 9. Moldano wrote a memoir about his childhood and called it Un Pedigree: “I couldn’t write an autobiography, that’s why I called it a ‘pedigree’: it’s a book less on what I did than on what others, mainly my parents, did to me.” He is married with two daughters.

He writes about “the pull of the past, the threat of disappearance, the blurring of moral boundaries, the dark side of the soul“*** ; his art “is the art of speculation“****.

Whatever this book is it is a fascinating way (‘postmodern!’ I hear someone screaming) to tell a story. His novels are only now starting to appear in English, spurred on, no doubt, by the Nobel Prize. Search them out and let me know what you think.

**In a soon to be published autobiographical fiction called Johnny William & the Cameraman.