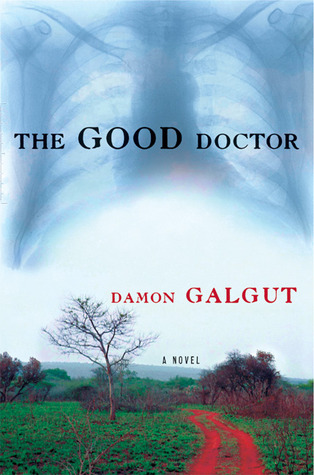 I found this book compelling. I altered my daily routine to make more reading time, to find out what would happen; and I appreciated the small editing trick that put the climactic event on the top of a new page: I turned the page and gasped. I knew something was coming, but not that!

I discovered the South African writer, Damon Galgut, via his latest novel, Arctic Summer, which was a fictional re-creation of the latter writing life of E. M. Forster in his attempt to come to terms with the writing of his most famous and last novel, A Passage to India, and his own sexuality (See my review posted on the 4th March 2015).

The Good Doctor won Best Book in the African section of the Commonwealth Writer’s Prize in 2003 and was shortlisted for the Man-Booker prize, as was his 2010 work, In a Strange Room, a copy of which I am searching for. There is now a space on my bookshelf for the works of Damon Galgut, when I find them.

The setting of The Good Doctor is post-apartheid South Africa, in a dusty, remote, native ‘homeland’ which was created, had money thrown at it, but then abandoned, and integrated back into South Africa itself; the ‘capital’ neglected, and the hospital seemingly forgotten by the authorities in Pretoria. It is to this underfunded, under-utilised, but over-staffed hospital that the good doctor, Laurence Waters, comes.

Interestingly the story is told in the first person by the implied, ‘bad’ doctor, Frank Eloff with whom the new arrival has to share a cramped room. Laurence is ambitious, eager, committed and full of big ideas; Frank is not, he is none of these things. He is a plodder; content to muddle through although over-reaches himself in his care of the few patients the hospital treats. It seems Laurence is focused on the process, the work, while Frank is focused on the outcome.

The tension is the product of these two diverse personalities forced to share a small bedroom within a just-functioning institution in a just-functioning society. A friendship develops despite Frank’s constant denial that one exists. Everywhere is the threat of violence. Soldiers appear apparently because the failed, and enigmatic previous military leader of the ‘homeland’ is still lurking out there in the bush somewhere. Off duty military men drinking in the only bar in town lean their rifles between their legs; road blocks, forced car-searches, and abrupt interrogations create a feeling of unease, and the threat of potential calamities. Also within the hospital all is on edge. Frank’s illicit affair with a local woman who doesn’t want conversation; the possibility of the surly male nurse, the only nurse, Tehogo and his ‘pretty’ friend, Raymond, being part of the ex-leader’s band; and his tense relationship with the only two females on the team, his boss Dr Ruth Ngema, and his ex-lover Catherine, a Cuban exile, who continually fights with her husband – their loud arguments in Spanish permeating the thin wall separating them from the two men trying to sleep in close narrow beds next door.

One day the thought of Laurence getting his own room creates an unwelcome and surprising feeling in Frank: he would prefer that not to happen. I kept trying to ignore the sexual tension here, passing it off as wishful thinking, but, no, it is there but I won’t spoil it for you by telling you what does or does not happen.

I’m a slow reader but I read this one in record time; I didn’t want it to end, but I couldn’t help turning the next page, and the next, and the next. Highly recommended.