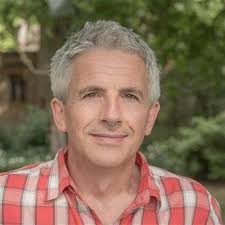 I read, years ago, Patrick Gale’s Rough Music (2000) which is anchored in my mind solely because of the protagonist’s long-time lover who also happened to be his brother-in-law; familial relationships of the unusual kind are his specialty, and those of Pictures from an Exhibition (2007) add to that reputation. The Middletons, husband Antony, and children Garfield, Morwenna, Hedley and Petroc, are Quakers who live in Penzance on the warmish tip of England’s most southerly bit and who revolve imperfectly around the mother and wife, Rachel Kelly, whose mental instability is only ever mollified, cooled, and placated by her painting: her world is only true and real to her once she can represent it in paint, form, and, sometimes only, colour – on something, anything, flat and at hand.

Each un-numbered chapter is headed by a note; that which you see, read, and is placed usually on the wall at the bottom right of a painting in an art museum. They begin with the painting’s name and then its medium – pencil and crayon on particle board, for example, and a paragraph or two adding colour and depth to its creation, subject, and then its current owner. These notes, you should know, not only illustrate Kelly’s art works, there are also objects, clothing even, which like art works, can sign-post our lives. Gale adds novelistic detail to this museum icon giving him a wry and clever means to add momentum, depth, and suspense to the following chapter. It is in one of the early notes that we discover in passing that there has been an untimely death in the family; the text features the deceased and one is a little tense for expecting the death to occur at any moment. When it doesn’t the tension remains and the expectation of tragedy is all the more true the longer one is forced to wait for it. The result of this little suspense I’ll leave for you to discover.

Each chapter doesn’t necessarily extrapolate on the opening note (but sometimes it does, of course); Gale is never always that obvious, and the portrait of the Middletons is not linear – Rachel Kelly’s death is in an early chapter – so their life, loves and dreams, both dashed and fulfilled, are built up with flash backs and forwards like the accumulated image of a jigsaw puzzle and all the more truthful for this intriguing form, layer-upon-layer, like walking through a retrospective exhibition of your favourite, but recently late, artist.

Early in the book I read this,

She was superstitious of describing the process but if forced to put it into words by a trusted friend she would have likened it to taking dictation – if one could take dictation of an image – from a quixotic teacher who could never be relied upon to repeat anything one failed to catch.

This dense, neat sentence which shines some light on the artistic process – no mean feat in itself – made me jolt in my seat and forced me to read it again, and again, until its cleverness revealed itself: in the short final clause the subject jumps from the speaker to the listener, like a filmic panning shot from one person to another. I read it again, aloud, just for the simple pleasure of it in my mouth.

Then, in hospital, after a suicide attempt Rachel Kelly is visited by a recent stranger and saviour, Antony, whom she later marries.

“You brought me flowers.’

There’s nothing that impresses me more than character building through dialogue: three little spoken sentences says more than a page of exposition; and a little later,

She didn’t sob or wail. Her grief was horribly discreet but as persistent and almost as silent as bleeding from an unstitched wound.

I was hooked, a fan, and wondered why I hadn’t garnered Gale’s output from my first exposure to him all those years ago.

Remembering Tolstoy’s famous opening line about unhappy families, all families, really, are unique in their own way; and the book although ostensibly about such a family is full of … well … interest. It hardly seems necessary for Gale to add an astonishing twist to the true identity of Rachel Kelly: she is literally someone else. However he handles this revelation with intimate historic detail, tone and a shift in the narrator’s allegiances that legitimises this remarkable plot swing and puts Gale firmly within the reader’s trust … but enough of that: no plot spoilers here.

Gale’s omnipotent narrator is of the free-wheeling kind: jumping from character to character with ease and intent to tell the story, to paint a family life; unlike some other, more popular writers – Dan Simmons, for example (see my blog post dated April 17), whose narrators are restricted: bound to one character.

I found myself scheduling reading time; always a sign of a good book.

Patrick Gale, was born on the Isle of Wright in 1962 where his father was the prison warden. He now lives near Land’s End with his partner, raising beef, barley and obsessively readable novels. Check out his website at galewarning.org.

Notes from an Exhibition, along with A Perfectly Good Man (2012), -my review will follow shortly – will become available on 31 May, 2016 and you can find them here.

A further release of titles, by Open Road Media, is scheduled for later in the year.

One thought on “Notes from an Exhibition by Patrick Gale”