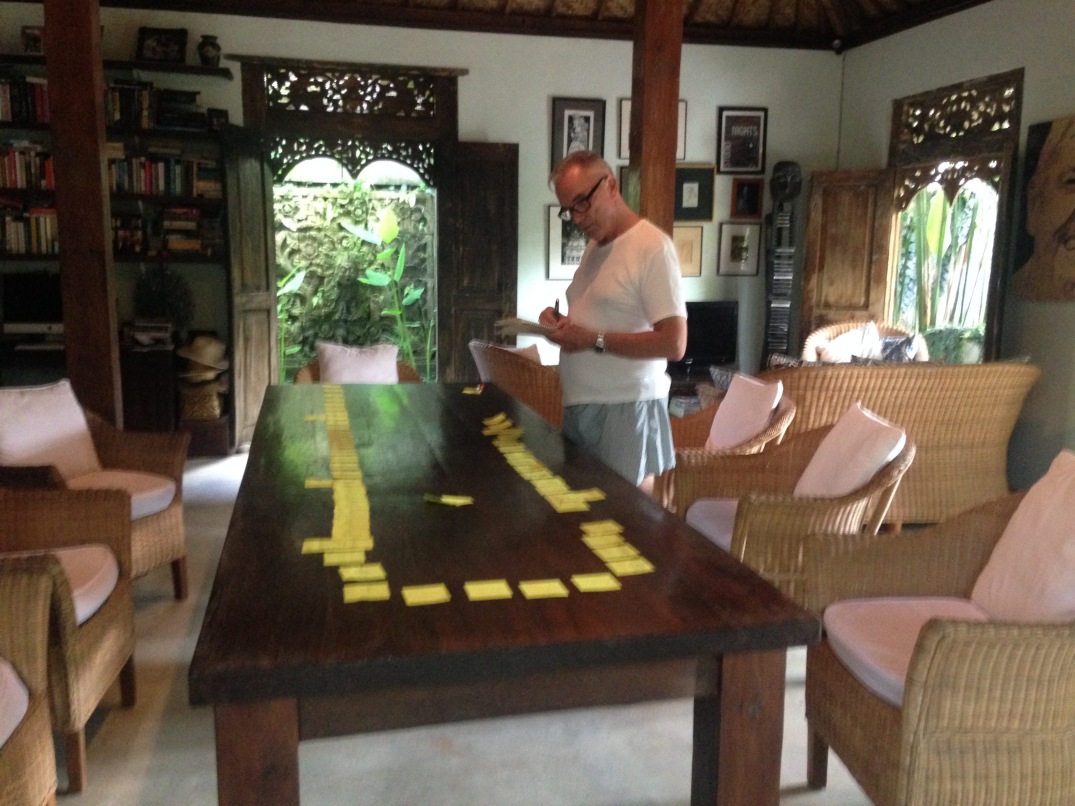 On my dining room table. Each post-it note is a chapter and/or plot point. Over the last 4 years I’ve been spewing out scenes onto my screen in some, but generally no particular order. Today was an attempt to find the narrative arc. Initially it looked a mess – well, it still is a mess, but it’s now a mess with a little more order. It also gave me some idea where the holes are. There are many.

Here’s the Prelude to give you an idea of what it’s about.

If you ask a family member – of any family – if they are happy, they would invariably pause, not wanting to simply say “yes”, and try to think of a word, or words, that would accurately describe their … but they would all so quickly realise that they have no idea how to describe how they feel so they say, “Yes,” usually adding, “of course.” You know this is a lie, but politeness and fear forces you to acquiesce and you smile and say something limp in acknowledgment, like “Good.” This is an example of two lies being better than none. You can both now get on with whatever you were doing; conditioning your hair, mowing the lawn, doing your tax, without upsetting the balance of the universe, happy in the nameless knowledge that you have successfully bypassed the slippery dip to yelling, tears, and/or the breakdown of your world as you know it. This is the bedrock of why families survive; sometimes, even when they shouldn’t.

If you realise at any time that you have somehow been perplexingly born into the wrong family, or if circumstances render your family suddenly, or slowly, unacceptable to you, you need to – or may be forced to – do something about it.

This is a story of a boy who did just that.

I needed an idea of what this boy might look like and I found this photo on the web and immediately I knew it was him:

He’s a fifteen year old boy who was hit by puberty ridiculously early and hard.

… and he’s still at school.

November 5, 2018 by Michael K Freundt Categories: Australian Literature, Creativity, How Novels Work, How to write fiction, How to write novels, Literary theory, proseTags: plotting a novel, Where do ideas come from? 1 Comment

One thought on “The New Novel”