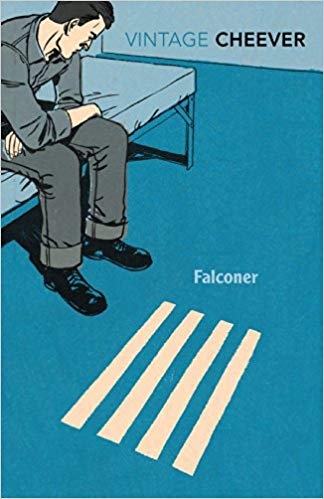 John  Cheever was not a very nice man; or, to be kinder, a very complicated man. His wife. Mary,  hardly spoke to him – she had good season, he disliked homosexuals but was one himself – one lover, a student, lived with the family for a while; but he also had a short affair with Hope Lange, and he was an alcoholic until 1973; his daughter describing him as a father said, “he was a nightmare”. He was a snob and feared shame; and while terrified of his sexuality he wrote “if I could express myself erotically I would come alive.” He and his wife certainly hurt each other but they didn’t see that as a reason to break up a family. He craved the safety of domestic life but it made him ‘blissfully unhappy’.

In Colm Tóibín’s essay collection New Ways to Kill Your Mother: Writers and Their Families (2012) his chapter on Cheever is entitled, New Ways to Make Your Family’s Life  a Misery. That chapter was well-thumbed while writing this post.

He loved fame. If you are a famous musician, you can play something; if you’re a movie star, you can give them an autograph; but if you’re a writer, as Cheever’s son Federico put it, “Well, you get to say pompous things. You get to talk about aesthetics and things like that. That’s the goodies you get.”

“I would like to live in a world,” Cheever wrote, “where there are no homosexuals but I suppose Paradise is thronged with them.”

Before he died he wrote to his son “What I wanted to tell you is that your father has had his cock sucked by quite a few disreputable characters. I thought I’d tell you that, because sooner or later somebody’s going to tell you and I’d just as soon it came from me.” “I don’t mind Daddy, if you don’t mind.” In 1991 the New Yorker and Knopf paid 1.2 million dollars for the rights to publish the journals. Mary Cheever did not read them.

Cheever’s most famous story is The Swimmer (1964): a man ‘swims’ home via all the swimming pools from where he had been lounging beside one, to his. He is well regarded by his neighbours along the way but as he ‘swims’ closer to home the mood gets darker and the context more surreal. Is this really happening? When he gets there his house is empty. It was made into a film in 1968 starring Burt Lancaster. It was unsuccessful, but since has garnered a cult status. It was also the acting debut of comedienne Joan Rivers and the compositional debut of composer Marvin Hamlisch.

Many years ago my partner (now husband) and I had a boat: an old wooden cruiser. We took two friends motoring on Broken Bay one weekend and had a meal at Cottage Point Inn. We moored the boat rather grandly right in front of the restaurant; had a wonderful long lunch; too many bottles of wine; and returned to the boat only to find that it wouldn’t start. One of our guests, Julian, a vet, pulled up the floor hatch, climbed into the engine cavity and with a small implement borrowed from a neighbouring boat (far more grand, far more impressive) and a teaspoon from our cutlery drawer, got the engine going. What impressed me most, and has stayed with me all this time, was the feeling of Julian’s self-confidence, ease, and complete understanding of what he was doing. That same feeling returned while reading this book.

Falconer got Cheever on the cover of Newsweek with the title, A Great American Novel in 1977. It was on the New York Times best-seller list for three weeks. Cheever won the Pulitzer Prize in 1979 for his next published work, his collected Stories.

Falconer, on the surface is a crime/punishment/redemption story: Ezekiel Farragut, an academic and drug addict kills his brother, although he admits hitting him with a fire iron, he says his brother was drunk and he fell and hit his head on the hearth; he has a “profound”  love affair with a fellow inmate and then escapes, posing as a corpse, and understands he’s a better man.

The third-person narrator self-references once …

… but at the time at which I’m writing, leg irons were still used …

This is rare, as if the narrator is a character, Cheever we suspect, but it need not be. If a third-person narrator self-references too much, he becomes a first-person narrator.

His wife, Marcia, visits him in prison

Farragut stepped into this no man’s land and came on hard, as if he had been catapulted into the visit by mere circumstance. ‘Hello darling’ he exclaimed as he had exclaimed ‘Hello darling’ at trains, boats, airports, the foot of the highway, journey’s end; but in the past he would have worked out a timetable, aimed at the soonest possible sexual consummation.

and as they talk,

Out the window he could see some underwear and fatigues hung out to dry. They moved in the breeze as if this movement – like the movements of ants, bees, and geese – had some polar ordination.

The narrator relates Farragut’s anecdotes about his relationship with his wife: their back story …

… he thought that perhaps a bag of fox grapes may do the trick. He was scrupulous about the sexual magic of tools.

He means ‘tools’ in the sense of ‘gifts’, but uses the word ‘tools’; it darkly colours the image with cynicism and says more about Cheever than about Farragut.

Contradictions are scattered through the text like peppercorns in a stew; light and shade, good and bad, right and wrong, innocence and guilt, ‘superficial and fortuitous’, masculine and feminine …

He had been called a bitch by a woman he deeply loved and he had always kept this possibility in mind.

Most of the text is a stream of consciousness, a re-emerging writing style, as noted in the Booker Prize 2018 winner, Milkman by Anna Burns;  but I’ll leave the last word to Tóibín.

You can read Joan Didion’s review of Falconer in the New York Times, March 6, 1977, here.

You can buy the Kindle edition here.