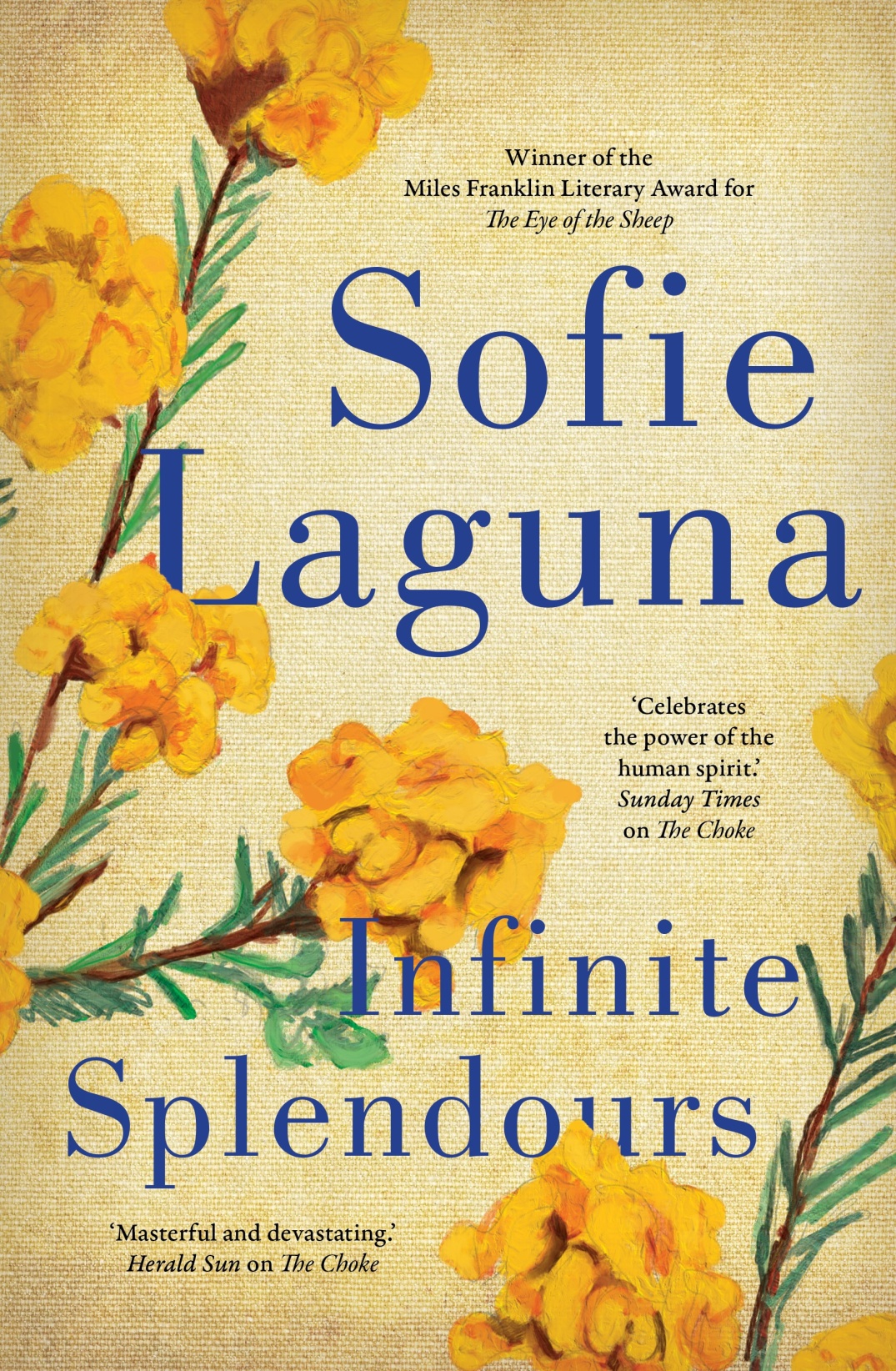 The first thing that struck me about this book was the marketing quotes on the covers, back and front: they were all for Sofie Laguna’s previous novels, not this one. I found this curious, particularly the quotes on the front cover. Were there no advanced critical readings? Maybe not. I have not read her previous work. However, I certainly know about her prizes and acclaim.

The title, Infinite Splendors (2020), is an uncommon collocation, and therefore very difficult to remember but when you realise it refers to the craft of painting it makes sense.

Lawrence Loman is an intelligent 10 year old growing up in Western Victoria in the shadow of the Grampians in the early 1950s. He lives remotely with his war-widowed mother, Louise, his younger brother, Paul, and next door to Mrs Barry. These people, and his teachers, Mrs St Clare and Mr Wade make up his world. They define everything he knows.

Mrs St Clare introduces him to splendors he had never imagined. One Friday afternoon she asks her students to don smocks, to stand in front of easels with paint and brushes, and to look at the large blank pieces of white paper on each one. She then directs their gaze towards the windows. What do you see? Lawrence does as he is bid, picks up the brush, dabs it in paint, and attends to what he sees out the window. Minutes later he looks at what he has done and gasps: Ah! Who did that?

From that moment he is attune to paint and light. He notices shadows on wet moss and wonders how to put them on paper; he notices the light on the mountains that loom over his world; he sees the light change and how it changes each peak; he understands how light on a face can change its expression, can change feelings. His teachers and mother are astounded at his intuitive skill, as is he. His future seems assured. These early chapters are wonderful to read and expertly described as a young bright boy discovers creativity, and more remarkably that that creativity is his own.

When his much-admired, and anticipated, batchelor uncle comes to stay everything changes, as did my expectations.

We are living in the golden age of television. Drama, particularly crime drama has been abundantly produced for the last few decades or more. Streaming services are many and the product they stream is excellent in every possible way. My only complaint at times has been the subject matter; too many crime dramas have relied on crimes against women: kidnappings, murders, rapes, mutilations, terror, and abandonment. This trend, I believe, is waning, much to my relief, but for a long time I lamented the apparent limited scope of television writers in their search for a plot. These crimes are horrific and spotlight the worst of our species and, of course, we can’t look away but as fodder for scripted drama I found it repetitive and predictable.

Similarly, was my reaction to this novel: a pedophile uncle? Oh no, not again! But yes. Lawrence Loman’s life is destroyed without any understanding, interference, or support from the adults around him: he has never told, can’t tell, anybody. His personality changes, he loses the ability to verbally communicate, he retreats within himself, and after all the adults in his world die or move away he is alone and we, as readers, are only left with his internal monologue and sparse meetings with strangers that scare him, abuse him, and think him crazy. That crazy old hermit who does nothing but paint. And paint he does, until the house is overrun with canvases, still lifes and the objects that inspire them, portraits, landscapes and cloudscapes. Anything that can capture light.

This is a great challenge for the writer: a protagonist that cannot effectively communicate and the 1st-person narrative combine to leave the writer with little but an internal monologue to work with. Laguna takes on the challenge head-on but is not completely successful. The latter half of the book is strewn with patches of repetitive purple prose that left this reader cold.

I also noticed that on her Acknowledgement Page no initial readers are thanked. So there were no advanced critical readings. This is a pity; such previews are invaluable and I’m sure this novel would’ve benefited from such a process.

You can buy Sofie Laguna’s Infinite Splendors, and her other novels, in various formats here.