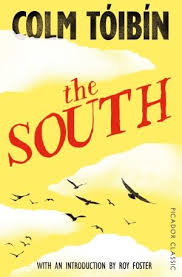 For a woman who, at any given moment, doesn’t quite know what to do, Kathleen Proctor, the protagonist in Colm Tóibín’s The South, has accumulated a raft of major decisions by the time she hits forty: she has abandoned her husband (just like her mother had done), son, and country; moved almost penniless to Barcelona, said yes to her mother’s financial support; taken up painting, taken a lover for his looks and attention; moved with him to the top of an isolated mountain in the eastern Spanish Pyrenees; and had a daughter. She just can’t decide if she should stay or go.

Tóibín’s attitude to, or fascination with, motherhood is a flavoursome ingredient in a lot of his work: it’s foremost in his first Booker Prize nominated novel, The Blackwater Lightship (1999) – about three diffident mothers; it underpins the decisions of the protagonist in Brooklyn (2009), she runs away from hers; The Story of the Night (1996) opens with a dying one; it is pivotal to his latest novel Nora Webster (2014) when a mother finds herself a widow and reclaims her life as ‘hers’, not ‘theirs’; & Jesus! how mother-obsessed can you get when you write a lengthy, grumpy, but redemptive speech for the mother of God, The Testament of Mary (2012). Here in his first published long-form fiction it is something that the protagonist, Kathleen Proctor, is ambivalent and confused about: children get in the way, children make a mother out of a woman and if it’s a woman you are trying to be, being a mother seems like a second choice, and she lets it happen, twice!

“I went to live in Barcelona in 1975, when I was twenty. Even before I went there, I knew more about the Spanish Civil War than I did about the Irish Civil War. I liked Barcelona, and then I grew to like a place in the Catalan Pyrenees called the [Farrera de] Pallars, especially an area between the village of Llavorsi and the high mountains around it. Until the late nineteen-fifties, the eight or nine villages in the area were cut off from the outside world, with only a footbridge connecting them to Llavorsi; there were some mountain passes, but no roads into France. I loved how enclosed it all was. For the past twenty years, I have spent a part of every year there.”

Tóibín worked as a journalist in Barcelona and wrote many short stories, including explicit autobiographical tales; a journalistic book about the city itself, Homage to Barcelona came out in 2002, and also this, his first novel, published in 1990.

It establishes Tóibín’s style; stark, formal, where the language is simple but clear – you never have to rush to the dictionary:

Like frames from a film where the reader supplies the action between each one; the movement between frames. The action seems mundane but the drama is in what the characters may be thinking or feeling but not saying.

He also spends short introductory paragraphs describing the weather, the place; something he no longer does.

Surprisingly the book opens with a first person narrative, by Katherine, of her first few disorientating days in Barcelona, alone and poor, after her abandonment of Ireland and her family. I’ve always been disquieted by works where the gender of the story-teller is different from that of the author (a publisher who turned it down thought it was written by a woman) but Tóibín’s honest prose appeased my initial objection via a detailed description of a potential molestation, in the dark, on a train, and I forgot all about gender; more about this later.

The South is a story of wish fulfilment even though Katherine doesn’t know quite what the wish is. However she takes up painting because she moves in painterly circles and it becomes her wish: to be a painter. Her development as an artist, and growing confidence, is reflected in the size of her canvases: small bits of paper at first but eventually to formats so big that they have to be left outside covered in plastic. She disappoints her husband and child by leaving them but picks up with two disappointed men in Spain; one she sleeps with, the Catalonian, the other, the Irishman, she doesn’t. Her life in Spain is about passion, sexual and artistic, the former she learns to do without, the latter she concentrates on but success is not what interests her. She doesn’t care, she is doing what she wants. Even tragedy becomes part of the passion: a rich and full life, albeit a penniless one.

As the book begins with a departure, it ends with a return; she faces the consequences of her youthful, and selfish determination, and learns to live with the forgiveness, of sorts, that is offered to her.

Although Tóibín’s featured characters are usually women, their gender isn’t what interests him. If a man had squeased two children out of his own body, born of love, necessity, acceptance, resignation or simple lust, and was then expected to care for them even if he didn’t want to; even if doing so made him feel less of a man; this is what interests him. This is what feeds his novelistic brain: human beings coming to terms with, not coming to terms with, fooling themselves, berating themselves, celebrating, manipulating, cursing, damning their own biology.

There are hardly any women at all in The Master (2004), arguably his masterpiece, but that’s exactly what it’s about too.

Oh, and by the way, The South doesn’t appear on Tóibín’s website; there’s not a mention of it. However in the new edition I have just read (Picador Classic Series) – my first copy was lost with my entire library in 2010 – there is a charming Afterward by the author where he talks of it with some affection and also surprise that he managed to finish it.

One day, when I had no idea how to proceed, when no new images came, when I felt I was blocked with the book, I remembered what Barrie Cooke had said. I made a mark. I decided that I would write the first thing that came into my head and then make it stick. What came was: ‘The Sea. A grey shine on the sea.’ I was surprised by this and began to work with it.