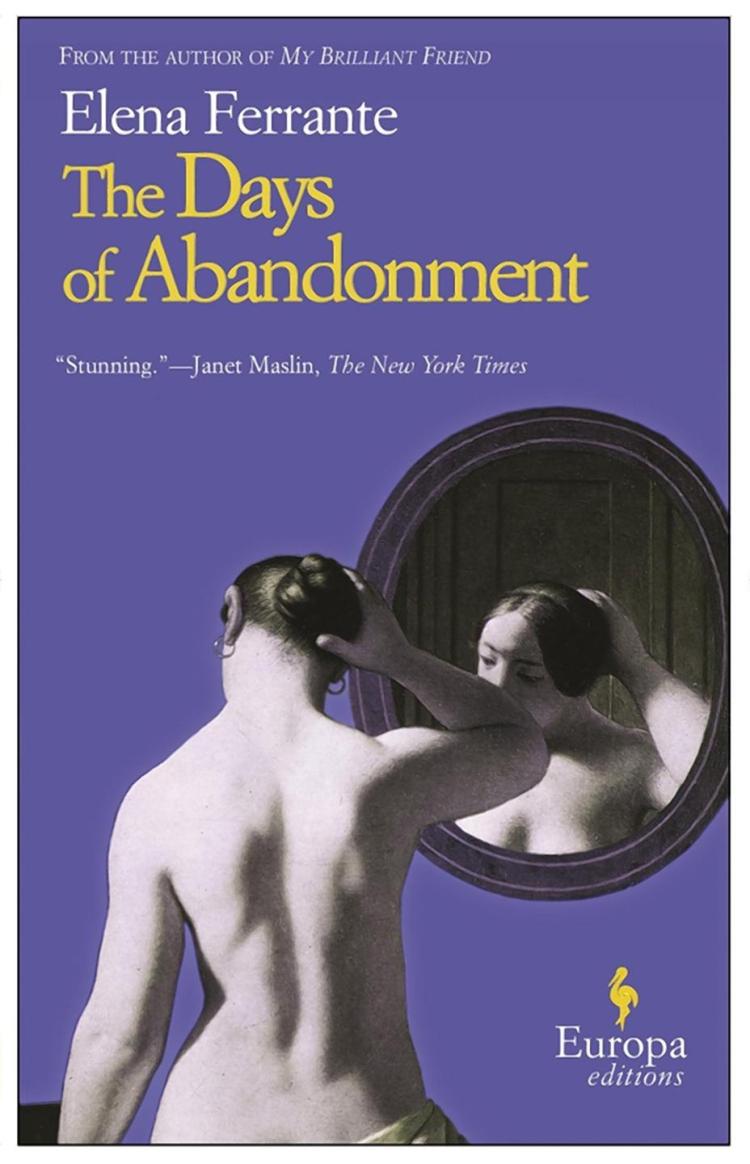 The abandoned woman has a long tradition in classic poetry and literature with Dido, Queen of Carthage during the Trojan war as the most famous example; a time when virtuous heroes where meant to choose duty over love. Abandonment, and the courage to put up with it, became a romantic womanly duty.
Not so for Elena Ferrante in her most famous novel, Days of Abandonment, 2002, (courageously translated by Ann Goldstein): her protagonist, Olga, who is told by her husband, Mario, a man of “quiet feelings” that he is leaving her because he was having “terrible moments of weariness, of dissatisfaction, perhaps of cowardice” and “he assumed the blame for everything that was happening and closed the front door carefully behind him” leaving Olga “turned to stone beside the sink.”  At first she thinks it is just a phase, he will be back,  but when she finds out the real reason for his departure she is enraged, she becomes violent, obsessed, deranged but determined.
Told in the first person, the prose is robust, strong; I can understand why some readers think Ferrante is really a man: it feels masculine and has a rowdy momentum that could sweep away any male equivalent like bulls before a train. But this is its strength. It certainly makes you turn the page. I’ve never read rage like this from a writer of either gender. It’s mesmerizing. And her attempt to redeem herself by adopting a man-ish attempt at seduction is funny, sad, distressing, messy, and humiliating all at once.
The action culminates in a single hot August day: the kids are on summer holidays; there’s no money to entertain them, besides the lock on the front door is faulty and they are trapped. There is sickness, outrage, potential violence and indifference, an annoying brat, and ants. It is exhausting and exhilarating. Great stuff. But if you hate reading strong language stay away!
It is a war, an internal war between the woman she was and the woman she’s become. Her senses become distorted: time stretches, her spacial understanding convulses and she no longer knows the usual spaces of her own home; they’ve become “transformed into separate platforms, far away from each other.” She loses her balance and can no longer trust her eyes to tell her what is there, her ears what is said, and her past what is true.
Convoluted but fascinating discourses on love, her past, the world, and relationships – “what a complex foamy mixture a couple is” – sways her brain away from her responsibilities which she fears will unseat her; she employs her daughter to jab her with a paper-cutter. She is losing it but she knows she is losing it.
She is also an outsider, from Naples, in Italy’s south but living in the northern city of Turin where a common saying peppers local conversation: North Africa starts at Rome. This would put her origins, in the minds of her neighbours, as somewhere in the southern Sahara, as remote as their imaginations could muster. They already think she is a little mad; maybe she is.
What you think could happen in a locked apartment during a hot summer’s day doesn’t prepare you for what does. The ending will be for you to discover but Ferrante’s point is unexpected, politically incorrect, but perspicacious, and once you read it, digest it and realise what she means, that last line will stay with you for a very   long    time.
You can buy the ebook at Amazon, Kobo, and Europa Editions and if you haven’t read it you should.