I have a mild aversion to literary fantasy. I rarely read fantasy novels; I’ve never had the slightest interest in reading George R. R. Martin’s The Song of Ice and Fire, more commonly known by the TV version, Game of Thrones, although I did try to read Lord of the Rings when I was way too young, but I found myself acknowledging the genre, and roping it in support of my argument when a dinner guest, on hearing that I had written a novel on the sex life of a single mum, said, “So, do you know any single mums?” “I’m not writing a documentary,” I said, “I’m writing fiction.” She looked at me as if I’d said the world was flat. I continued, “Well, I’m glad you weren’t dishing out literary advice to Tolkien or George Martin otherwise we’d be without Lord of the Rings, and Game of Thrones.” Zombies, aliens, vampires, fairy god-mothers, elves, and talking rats and rabbits also sprang to mind, but she moved to the other end of the table before I could bring them in to bat.

When the British writer, Kazuo Ishiguro, won this year’s Nobel Prize for literature I scoured my bookshelf and found Never Let me Go (2005). I didn’t know anything about it, and all that I knew previously about Ishiguro, was that he had won the Man-Booker Prize for Remains of the Day, was born in Japan, and that his family had moved to London when he was a child.

Page one begins, “My name is Kathy H.” I had just read Sebastian Barry’s memorable The Secret Scripture, a male writer writing in the first person as a woman, so my pre-established prejudice against such literary cross-dressing had been severely weakened, to a point of not caring very much. However, halfway down the page there is this:

“My donors have always tended to do much better than expected. Their recovery times have been impressive, and hardly any of them have been classified as ‘agitated’ even before fourth donation.”

The words “donors” and “fourth donation” sent a worry-jolt to my brain and I suspected that the created universe in which this story would unfold was not the one that I live in, but I felt safe from dragons or talking trees, so I continued reading.

It’s important to tell you that I was hooked very quickly but the book also made me think more about why I don’t read novels from the fantasy genre, as I now thought this book belonged to. It’s a general feeling of aversion for the literary ‘cop out’. If the universe of the novel has dragons flying through the air, i.e., the universe of the novel is not your universe, then it seems to me that anything is possible. A plot complication of any magnitude could be sorted out by any deus ex machina the writer deems necessary. This feeling isn’t strong, but with so much to read in the genres I prefer, the urge to delve into others doesn’t really come up. Genres are only important for publishers, booksellers, and readers; I acknowledge them as a reader, but writers, and especially Ishiguro, don’t pay much heed to them. His Remains of the Day, a very English tale of love and painful reticence is in the most English of settings: below stairs in a manor house; while his most recent novel, The Buried Giant is a true fantasy novel set in post-Arthurian Briton.

Kathy H is a thirty-something woman remembering her education at a boarding school, Hailsham, and her friends, Ruth and Tommy. The school is recognisably British but with weird and worrying rules, attitudes, and characters. It becomes clear, through mis-matched memories, remembered inconsistencies, and briefly explained circumstances that the world of the novel is not the world of the reader; and the fate of the students is mapped out, rigid, and dystopian.

The almost lazy diary-style of remembrance, “It was just like the time when…”, “… looking back now…”,”I don’t know about you, but where we were…”, “… and that reminded me of Chrissie, who …”, “…the way I remember it is…”, “It’s funny now recalling the way it was at the beginning…”, “… and that’s when we had that talk I told you about …”, gets a little repetitive, and the incidents and events she remembers has about as much dramatic content as “sharpening a pencil”, as one critic joked; but these remembrances of seemingly minor happenings do create something in the reader similar to the experience of the narrator; no mean feat: a jumble-book of seemingly indistinct and trivial memories flavoured with asides and happenstance of their lives that coalesce eventually into a sprawling picture of unease, and controlled morality and personal destiny. You begin to like these young people; wonder how much and what they know about themselves and their circumstances; and what is this curious feeling of dread you find creeping over you like a blanket?  Yes, the remembrances may be small but the stakes are incredibly high and when Kathy H and her peers discover the true meaning of their existence … no, no spoilers here; you’ll have to read it yourself to understand the frightful truth.

Ishiguro’s chosen narrative style is conversational, prosaic even, how a good friend may write a letter (remember writing letters?) telling you what they did on the weekend. No literary language or erudite psychological musings, just memories of a middle-class woman about her upbringing; oh, and allowing un-spoken assumptions that the reader takes in, by osmosis, that creates, deep-down at first, this creeping disquiet.

It’s not a book you can easily forget. It is one of the most unusual and emotionally disturbing books I have ever read. I admire Ishiguro’s control over what he writes; how his skill is hidden and you only marvel at it when the story is over, and then you understand that what you feel is a direct, and deliberate, result of it.

You can find the book, in various formats, here.

Oh, and BTW, here is a piece of advice from Kazuo Ishiguro, “Write what you know is the stupidest thing I’ve ever heard”. I wish I’d known about this quote as more ammunition for my brief literary discussion with above dinner guest. 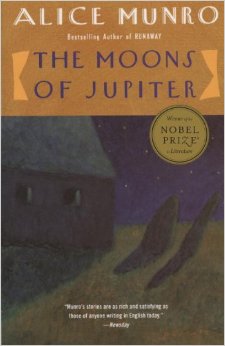 How’s this for a scenario; an artistic projectory: shy student marries as soon as she graduates, scared that she is old-maid material; wants to write novels but has children instead; still wants to write novels but time is limited so writes short stories while the babies are napping; when they reach school age has more time to write but has to stop writing mid-afternoon to do housewife and mother duties before family gets home; keeps writing short stories until she’s 82; wins Nobel Prize for Literature.

When told of her win, “It just seems impossible,” she said.

She is the 13th woman to win the Literature Prize and the second Canadian (after Saul Bellow), and therefore the first Canadian woman.

She writes about the internal drama of relationships usually from the female point of view; about simple country people, but also academics. She is often called ‘the modern Chekhov’ which is not entirely true: Chekhov is more interested in behaviour, Munro in the thoughts behind behaviour.

This collection, The Moons of Jupiter, came out in 1982. It contains eleven stories. One of them, Barton Bus, written in the first person describes a brief love affair in Australia but all the other scenes, like scenes from a bus window that pass you by, describe what it might be like if she, the narrator, bumps into the once brief lover. What will she say? What will she do? She doesn’t use his name only a letter;

“I call him X, as if he were a character in an old fashioned novel, that pretends to be true. X is a letter in his name, but I chose it also because it seems to suit him. The letter X seems to me expansive and secretive.”

In the brief final scene a female friend, Kay, describes to the narrator a man who is a friend of her husband’s and after dinner he sighed and laid his head in Kay’s lap. She thought it was a ‘nice simple’ thing to do. She mentions his name. I gasped! It was him! and the narrator does not say a word.

I’ve probably spoiled this story for you but when you read it, it will undoubtedly mean something different to you as meaning is always in the mind of the reader.

In Visitors a couple welcome the husband’s brother, his wife, and her sister to stay in their house which is so small that no room can accommodate them all at once. If the fifth person enters someone has to stand in the doorway. Sleeping arrangements are a bit like camping. They go for a drive – they can all fit in the car … just. They talk, they drive, they look for the site of the birth-house of one of them. It’s no longer there, but they imagine it. The talk is simple, personal, clichéd like small-talk. The three visitors finally go back home, a very long way away. The couple are back in their own small bed and Mildred realises Wilfred is crying: he will never see his brother again. They could visit. Will they? Probably not but she says ‘maybe’ and he says ‘not next week’.

I was left with a feeling of regret, mixed with helplessness wound around with sorrow leaving these two people in their cramped space forced to cling to each other as some sort of protection from the miseries of the world.

“When I write about something happening in this setting, I don’t think that I’m choosing to be confined. Quite the opposite. I don’t think I’m writing just about this life. I hope to be writing about and through it.”

All her stories are set in the country to the east of Lake Huron, Canada because she loves it; she understands the people, she likes its climate, its falling down barns, its “occasional farms that have swimming pools and airplanes.” She speaks the language.

Alice Munro, who doesn’t write any more (there are many published collections), reads and sometimes she doesn’t start to read a story from the beginning. She starts anywhere and reads forward a bit and sometimes goes back a bit. To her a story

“is not like a road to follow, it’s more like a house. You go inside and stay there for a while, wandering back and forth and settling where you like and discovering how the rooms and corridors relate to each other, how the world outside is altered by being viewed from these windows … and you can go back again and again, and the house, the story, always contains more than you saw last time.”

Having a volume of Alice Munro short stories by your bed is comforting as well as enlightening and entertaining no matter how many times you read one.